I’ve added all the public appearances Lizzie made that were missing from our gallery to it. I’ve also added lots of additional HQ photos of Lizzie during the Oldboy screening thanks to my friend Ann! 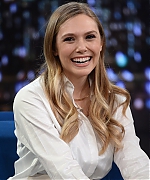 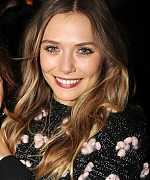 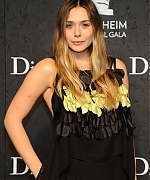 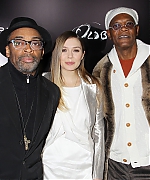 Olsen shines brightly as a fresh, mercurial Juliet, by turns spunky and then earnest as she plots to deceive her parents and be with Romeo. – Source

Olsen, decked out in an off-white baby-doll dress and black high-tops, has natural stage presence and a quietly innocent charm — and she really comes alive in her scenes with the Nurse, played with spunky Latina energy (and muttered ”Dios mio”s) by Daphne Rubin-Vega. – Source

The phrase “rising star” was invented for performers like Elizabeth Olsen. The 24-year-old actress (younger sister of fashion moguls Mary-Kate and Ashley) first wowed movie audiences as the haunted Martha in 2011’s critically acclaimed Martha Marcy May Marlene, and will star in three soon-to-be released films, plus Godzilla and a forthcoming star turn as the Scarlet Witch in The Avengers: Age of Ultron. Rather than heading off to Hollywood for good, Olsen, a recent grad of NYU’s Tisch School of the Arts, is currently in previews as Juliet Capulet in Classic Stage Company’s revival of Romeo & Juliet. The in-demand actress recently chatted with Broadway.com about loving Shakespeare, lessons learned from her famous sisters, and more.

How does it feel to be making your off-Broadway debut in Romeo & Juliet?
It’s really, really exciting and terrifying [laughs]. For a couple of years, [CSC Artistic Director] Brian Kulick and I have been trying to figure out what to do together. Last March, he proposed a reading of Romeo & Juliet, and I wasn’t that interested until I started to do the work. I feel like I saw Romeo & Juliet for the first time. I always thought of it as the most typical Shakespeare play; every human being on earth, if they know literature, knows Romeo & Juliet. But I realized there’s a reason why, because it’s one of the most beautiful plays every written.

What do you relate to in the character of Juliet?
You cannot bend Juliet—she is so determined and headstrong, but not in the negative sense. Anytime she sets her mind on something, she attacks it at full force and I find that fascinating. She’s so smart about everything and she’s such a strong young woman, the only one who’s making active choices. Everyone else is dealing with things, and she’s the one who proposes answers.

How does it feel to be co-starring with newcomer Julian Cihi rather than an experienced actor like Finn Wittrock, who was originally attached to play Romeo?
Oh, it’s fine! We’re figuring it all out together, trying to settle on a common dialogue and trust and safety and how we both work. No matter who you’re working with, whether it’s someone’s first job or their 57th, everyone ends up saying, “I don’t know what the hell I’m doing.” If you don’t, what’s the point of collaborating? So, I don’t think it makes too much of a difference. The funny thing about Finn is that he had already done Romeo in an all-male production, so I was like, “Great! He’s gonna show me the ropes.” [Laughs.] But it’s more interesting to come together as a group of people and discover everything for the first time.
END_OF_DOCUMENT_TOKEN_TO_BE_REPLACED

Lizzie was a guest on Late Night with Jimmy Fallon earlier this week. She was there to promote Romeo and Juliet. Jimmy even had a little graduation ceremony for our girl as she didn’t go to her own. Be sure to check out the interview below!

The production had originally been scheduled to begin previews Sept. 27 but was delayed due to a scenic element modification that required additional technical rehearsals.

Romeo and Juliet will continue through Nov. 10.

Along with Olsen (Impressionism) and Cihi (The Importance of Being Earnest, A Month in the Country), the cast includes Daniel Davis (La Cage aux Folles, “The Nanny”) as Friar Laurence, Emmy Award nominee T.R. Knight (A Life in the Theatre, Tartuffe) as Mercutio and two-time Tony nominee Daphne Rubin-Vega (Rent, Anna in the Tropics) as the Nurse.
END_OF_DOCUMENT_TOKEN_TO_BE_REPLACED