Elizabeth Olsen for Who What Wear

WHO WHAT WEAR – The 30-year-old actress’s identity doesn’t seem like it would lend itself to much mystery. Since 2014, Olsen has starred as the Scarlet Witch in Marvel’s superhero movie franchise—one of the most-watched film series in entertainment history. (This summer’s Avengers: Endgame quickly became the second-highest-grossing movie of all time.) It’s a role she’ll reprise later with WandaVision,
a Disney+ spin-off series about her superhero character coming spring 2021. In the meantime, Olsen executive produces and stars in Sorry for Your Loss, a drama series following Olsen as Leigh, a young widow struggling to deal with the sudden loss of her husband. (The show airs on Facebook Watch, and its second season premieres October 1.) By any objective measure, business is booming for Olsen, the younger sibling of Ashley and Mary-Kate, who long ago reached a level of fame so behemoth they no longer need a last name. The Olsens are as much American royalty as the Kennedys or the Rockefellers. I should know everything about Elizabeth Olsen. 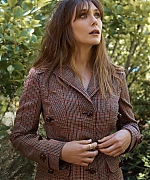 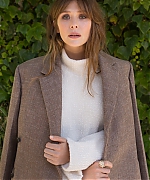