Wandavision
Wanda Maximoff / Scarlett Witch
Blends the style of classic sitcoms with the MCU in which Wanda Maximoff and Vision -two super-powered beings living their ideal suburban lives-begin to suspect that everything is not as it seems.
Info News Photos IMDb Official 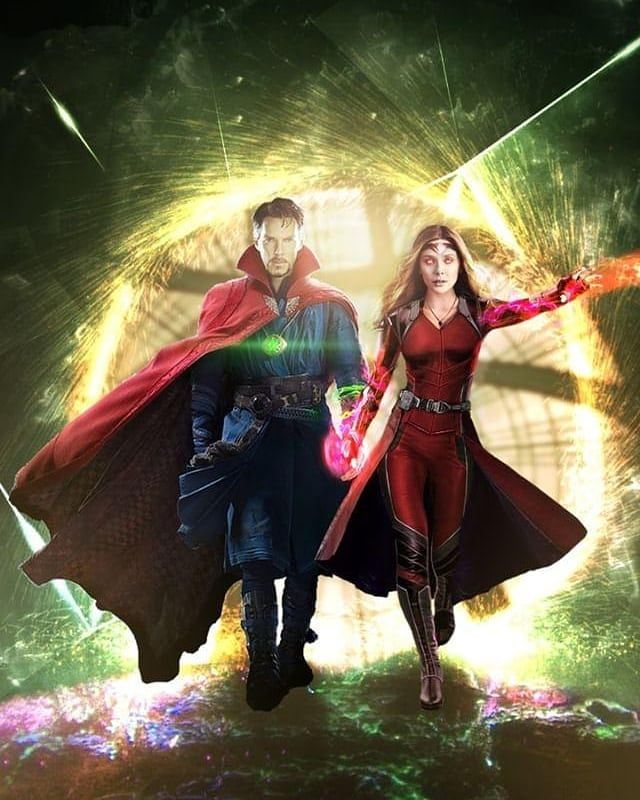 made by lzzieolsn
Featured Albums

Elizabeth talked to Telegraph about growing up in Hollywood, being photographed and gender pay disparity.

Elizabeth Olsen is in Nashville. Itâs green and wet, and sheâs surrounded by nature. She flew in the day before â she has a few weeks off before returning to work on next yearâs Avengers: Infinity War â and she was hoping to travel incognito.

âNo one else had my flight information, I didnât hire a car, nothing. I got off at Nashville, and thereâs one fan there who had pictures to sign, and I just said, âNo, Iâm not going to sign that.â I think thatâs creepy and I donât think that behaviour should be rewarded. You must have to work really hard to get that informationâ¦ thatâs someone whoâs a little bit stalkery to me.â

The 28-year-old actress has been dealing with that kind of attention all her life. As the younger sister of the Olsen twins, Ashley and Mary-Kate, now 31, who were television and film stars as children in the Nineties, Olsen recognises that her experience is out of the ordinary.

She doesnât want to comment on Mary-Kateâs remarks, made in 2010, about not wishing her upbringing on anyone. Nor does she want to make a fuss about her own experience of diminished privacy â after all, she says, sheâs found ways to deal with it: âWhen I was at the airport yesterday, one guy came up to me and said, âHas anyone ever told you, youâre the spitting image of Elizabeth Olsen?â And I said, âOh yeah, Iâve heard that before,â and that was it. I feel bad for Jennifer Lawrence; Iâm fine.â

Like Lawrence, though, Olsen is attempting to steer a course between intelligent independent movies, such as the cult thriller Martha Marcy May Marlene (2011), and blockbusters such as Godzilla (2014) or the vast Avengers franchise, in which she plays Scarlet Witch. Her latest film, Wind River, is a return to the sort of edgy drama with which she made her name. Itâs a murder mystery set on a real-life American Indian reservation in Wyoming, home to the Arapaho and Shoshone tribes. Olsen plays an FBI agent opposite Jeremy Rennerâs tracker and hunter, whose job it is to protect livestock from predators such as wolves and cougars.

Growing up in the LA suburb of Sherman Oaks, Olsen admits that filming in the snowy mountain wilderness took her well out of her comfort zone. âThe one time Iâve rented a place in Upstate New York, I remember we had six inches of snow, so I had to shovel my car out, and I was, like, this weather isnât for me.â

The role, which demands that her character, Jane Banner, show authority in an environment dominated by men, was a challenge, too. âShe is someone who has to assert herself as the leader, blindly initially,â says Olsen. âHow do you have that much confidence and belief in your abilities?â She laughs. âIn an isolated group of people, where someone needs to become leader, Iâm never that person.â

She says she did a lot of physical preparation for the part with former law enforcement officers and war veterans: âWithout them I would have had a very hard time just navigating how to walk and how to talk.â She also practised shooting because she wanted to look like she knew how to handle a gun, but admits: âI was really nervous to scream âFBI!â because Iâve seen it in so many movies and television shows.â

The result is a genuinely thrilling genre piece, written and directed by Taylor Sheridan, who wrote the screenplays for the intense drug war drama Sicario (2015) and last yearâs modern Texas western Hell or High Water. There is a disturbing rape and murder at the centre of Wind River, however, which could be seen to fit the feminist argument against many films and video games, that violence against women is used as a plot device to create a motive for revenge narratives. I ask Olsen how she felt about the sexual violence when she saw it in the script.

âI think there is nothing glorified about all the violence in this film, especially that rape scene, and thereâs nothing gratuitous about it,â she says. âIt happens all the time. I volunteer at the Rape Treatment Centre in Santa Monica â itâs probably the best facility in the United States for sexual assault victims. They have an 18-and-under section and I just hang out in a playroom and keep people busy while their teachers or their parents are doing their portion of the therapyâ¦ And because of this film I decided to become more actively a part of it, because itâs not going away. Sexual assault and rape is everywhere.â

One father in Wind River expresses how closely he and his wife had watched over their daughter, but still she had been vulnerable. I ask Olsen if her own parents had had to guard her and her sisters very carefully growing up in and around the entertainment industry (by her eighth birthday, Olsen had already appeared on screen with her sisters seven times). âWith my sistersâ¦ my parents didnât know anything about the film industry,â she says â her mother is a former ballerina, her father a property developer.

âSo they hired people that did, and a lot of women, to surround our family in that way. I know people have horror stories of working as child actors and Iâve heard some of them,â she adds, âbut I think weâve always been very business oriented.â The Olsen family ethos certainly wasnât about âglorifying fame and celebrityâ, she says.
“Iâm a white blonde American woman, and I know what that looks like to other people. Itâs very important not to fool yourself.”

For Olsen, itâs important that even genre films, designed to excite cinema audiences, incorporate ideas about the world that need to be spoken about. And there is certainly more than one issue tackled in Wind River, which features striking performances from its leads, as well as from Gil Birmingham and Martin Sensmeier, who are both of American Indian descent.

In the film, life on the reservation, for women and men, is far from happy. (âIâm so tired of fighting this life,â says Birmingham at one point.) I ask Olsen if she agrees that the American Indian experience is something that most Americans still donât really want to have to think about.

âI think itâs something we donât know anything about,â she says, recalling seeing pictures of a reservation for the first time when she was at college and being baffled at how it looked. âYouâre thinking, âOh, they run the casinos and they donât have to pay land tax â how gross is that?â But you donât know about generation after generation being mistreated by the government, although I think with Standing Rock weâve understood a little bit more.â (The building of the Dakota Access Pipeline and its threat to lands that belong to the Sioux, despite massive protests, after an executive order issued by President Trump in January, has created a political storm.) âItâs more part of the conversation than when we were filming, thatâs for sure,â Olsen says.

Race itself has become a Hollywood hot potato in recent years, with concern about âwhitewashingâ â casting white actors to play characters of other races. There was some criticism when Olsen was cast as Scarlet Witch, who, in the Marvel comic books, is of part-Jewish, part-Roma origin. How had she dealt with it? âI didnât know people said it about my character,â she says, âbecause she is from eastern Europeâ¦ I mean I look Russian when Iâm in Russia [she studied theatre there for a time], so I didnât know.

âI know Iâm a white blonde American woman, and I know what that looks like to other people, and I know what saying I went to a private school looks like to other people. I think thatâs why people try to put on some accent and be a little bit tougher or more âstreetâ than they actually are. I think itâs very important not to fool yourself. You can be who you are and still be able to relate to different kinds of people in the world.â

She says her privileged upbringing means that sheâs had to work hard for people to overcome the perception that she wonât understand anything about other peopleâs lives. Sheâs certainly hard-working. She has another film â Kodachrome â coming out this week in the US, and the social media thriller Ingrid Goes West, about a woman who becomes obsessed with Olsenâs character, a popular âinfluencerâ on Instagram, will be released in the UK in November.

Like most actresses, she also still has to push for pay parity with male actors on independent movies (she says she doesnât know what others get paid on the Avengers films) but, she notes, âI donât always get paid equally â but then I also havenât had multiple [award] nominations. I donât know how much weight I carry, I donât know how to value myself.â

Meanwhile, sheâs just getting on with being photographed every time she steps out with a new boyfriend. Does fame make relationships harder? âI donât think so,â she says. âBut I think itâs hilarious [that idea], âCan a relationship last in Hollywood?â âCan a relationship last?â is the real question. I think the whole worldâs having problems with that, not just Hollywood. Ask the people at the grocery store.â

Wandavision
Wanda Maximoff / Scarlett Witch
Blends the style of classic sitcoms with the MCU in which Wanda Maximoff and Vision -two super-powered beings living their ideal suburban lives-begin to suspect that everything is not as it seems.
Info News Photos IMDb Official

made by lzzieolsn
Featured Albums