Out of the long list of talented, young and beautiful stars in Hollywood, Elizabeth Olsen stands as a lone wolf. A self-described “old soul,” the 26-year-old actress studies Chekhov and Stanislavsky, avoids TMZ at all costs and has managed to opt out of all social media channels for fear of losing focus (Olsen has no Twitter, Facebook or Instagram accounts). All this makes her the perfect choice to grace FASHION’s May cover as the issue aims to celebrate the intelligence and style of women of all ages (make sure to also check out exclusive profiles with Joni Mitchell, Gigi Hadid, Kim Gordon and Julianne Moore).

Photographed and interviewed in New York City, Olsen’s feature with FASHION—which will be on newsstands on April 20—covers her generational concerns, her upcoming role in Avengers: Age of Ultron and the upcoming Hank Williams biopic, I See The Light. Here’s a sneak peak of Olsen’s conversation with FASHION’s features editor, Elio Iannacci.

On the way people her age are depicted on TV and film:
“It is annoying to me the way my generation is written about—that we are all entitled slackers and hackers.”

On the super fierceness of her character—The Scarlet Witch—in Avengers: Age of Ultron:
“She’s grounded and centered because she’s always receiving information—she knows everyone’s everything because of her telekinesis. She has access to the past, the present, the future and parallel universes—she can connect with all of them.” 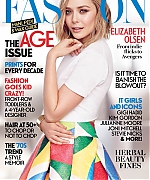 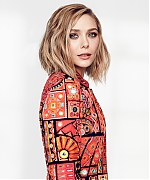 On her enduring love of Mary-Kate and Ashley’s fashion sense:
“I used to steal so many clothes from my sisters and wear them but now I buy the same thing all the time: white and black button up shirts from The Row. I’m in head to toe in The Row right now. Where the pockets are placed, where seams are stitched, it’s all so meticulous for them so I appreciate their talent. I love going to their offices to learn.”

On refusing to work on certain movies:
“I read this brilliant script the other day that is a thriller but I had to say no to it. There’s enough violence in the world, why add to it? Superhero movies are about destroying robots not people so that doesn’t count. Besides, all the heroes—especially in Marvel comics—are about heralding the underdog or the outsider.”

To read our cover story, pick up the FASHION Magazine May 2015 issue starring Elizabeth Olsen, available on newsstands April 20, 2015.