I have to admit, I had high expectations when meeting Elizabeth Olsen. Since her breakout role in last year’s Martha Marcy May Marlene, the indie darling (and kid sister of Mary-Kate and Ashley) has carved a niche for herself as one of those rare cool girls who don’t take themselves too seriously. And she proved me right. In person, Olsen, 23, is upbeat and genuine, and when she talks about her passions—school, clothes, her new role in this month’s romance Liberal Arts—her Kewpie-like eyes light up. Get ready to fall in love, because…

She doesn’t trade on her name

“My last name has always been my motivator to get proper acting training and be taken seriously. I didn’t get to where I am because of who I’m related to.”

She’s juggling it all (so normal!)

“I love school, but I got cast in Martha while I was at New York University. So I was like, Screw it. I’ll take this semester off. I’m still trying to figure out how I can finish my degree while doing all this!”

She’s weirded out by fame

“Yesterday three people told me that I look like Elizabeth Olsen. That’s never happened before. So awkward.”

She looks up to her big sisters

“They figured it all out, and I should just listen to them more.” 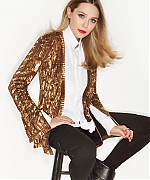 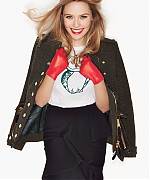